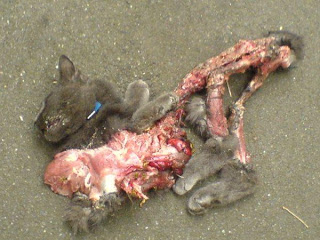 Left, one of a handful of photo's taken by Sara Hill.
SYDENHAM: Panther could be to blame for 'savage' death of pet cat
3:50pm Monday 28th September 2009
By Dan Keel
A PANTHER is feared to be on the loose after a mother-of-three stumbled across a pet cat which had been "savaged" and eaten.
Sara Hill, 32, made the grim discovery on Saturday during her daily walk around Sydenham's Southend Park with her two dogs and eight-month-old son, Archie.
A cat, still wearing its collar, was lying in the middle of a footpath and had been stripped of its fur, skin and flesh. Only its head and feet remained untouched.
The horse groomer who lives in Bellingham, said: "As I walked up to it I thought it was an old jumper - but then as I got closer I suddenly realised what it was.
"It's one of the most horrific things I've seen. I am a country girl and have seen a lot of dead animals and have plucked chickens - but I wasn't prepared for this.
"The poor thing had been completely savaged. There is no way a dog did it, as it would have been ripped apart. And a fox would have taken it away."
Miss Hill sent News Shopper some photos of the body which can be seen by clicking on the link below.
We passed them to full-time big cat researcher Neil Arnold, who has been studying cat sightings in the area for more than 20 years.
He said: "It looks very much like a large cat would carry out this type of kill, especially when comparing it to other kills I've examined over the years.
"The main animal seen around Sydenham, Penge, Norwood and Bromley is a black leopard - or panther.
"I've seen a black leopard three times locally, and have evidence such as livestock kills, faeces and paw-prints. But kills of animals are the best evidence."
He added: "When a leopard kills, it kills only to eat, to survive, and will rasp away fur with a sandpaper like tongue leaving a very clean kill.
"Domestic cats are on the menu although preferred prey is pigeon, pheasant, rabbit, rats, mice, and also larger prey such as deer and sheep.
"A black leopard mainly hunts at night and a cat seen around Sydenham could also travel to Sidcup, Welling, Dartford, via Orpington, Sidcup, Crayford, Hayes - all areas where a black leopard has been seen."
Mr Arnold also said black leopards are no threat to humans unless cornered, provoked or injured.
Posted by Neil A at 20:43 No comments:

Is this a photo of the 'Palace' puma/panther ? (OF COURSE NOT!!) 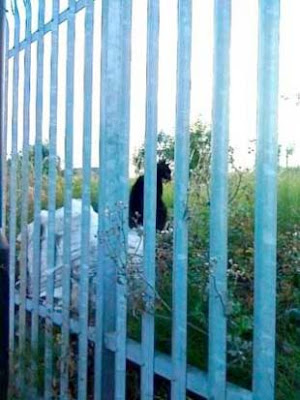 Tragically the 'Palace puma' story is now nothing more than a farcical fiasco, which DID stem from a genuine encounter with a black leopard. However, now a Ms Mazur has claimed to have photographed the local beast - even though the photo is nothing more than a domestic cat. Sadly, it's this kind of rubbish which tarnishes research into such matters.
Posted by Neil A at 20:35 1 comment:

Neil clears up the facts and fiction from the latest London-related big cat scare at his SATURDAY STRANGENESS column.
Posted by Neil A at 15:40 No comments:

Neil Arnold discusses his research with the Kentish Times

For the full story read more HERE
Posted by Neil A at 15:27 No comments:

Story from the CROYDON GUARDIAN
Posted by Neil A at 12:29 No comments:

Two teenagers have come forward to report their encounter with a black leopard in the Bromley area. Story from the NEWSSHOPPER
Posted by Neil A at 13:56 No comments:

The Croydon Guardian leap onto the beastly bandwagon!

The Newsshopper completely make a mess out of investigating the 'Palace Puma'!

When are the local newspapers going to finally send out a reporter who for once, looks into 'his' research rather than completely sensationalising ? Of course, the press are known for making mountains out of mole-hills, but why do this when the facts of the matter are already stranger than the fiction they are trying to create ? Take for example the case of the 'Palace Puma' - a cat which was never a puma in the first place, and wasn't exactly seen at Crystal Palace.

The Newsshopper sent out poor Scott Mullins looking for the beast, read all about it HERE
Posted by Neil A at 13:55 No comments:

From the Dartford Times
Posted by Neil A at 13:40 No comments: