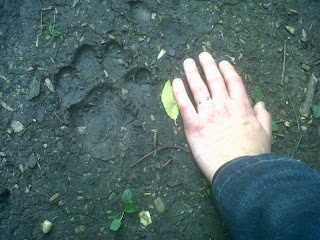 This interesting paw-print photo was taken near High Halstow in Kent recently. Sadly the witness only photographed one print (there were several of these). None show claw indentations and all show a lack of symmetry with the two central toes. Opinion seems divided on these prints. Of the 19 people who were originally sent the photo, 14 thought it was made by a large cat, the rest stated the possibility of a very large dog.

There has been a sighting recently of a large black cat at Thannington.
"Back in July 2012 my husband saw a large black animal (larger than a fox) crossing the road outside of Chartham just past where Cockering Road joins Milton Manor Road on the way to Thannington, Canterbury. Tonight he saw the same size and type of black animal (about a labrador size) at almost the exact place at around 5.15 pm travelling downhill in the direction of the river Stour (last time it was travelling uphill away from there at around 9pm in the evening). He was sure it wasn't a fox or domestic cat or dog, by it's size, the way it moved like "big" cat (it wasn't in a hury this time, last time it raced at speed across the road, too fast for our native and domestic animals), and he was certain it was black. My son (of 17) was also in the car tonight and verifies the description, as last Saturday we saw a black panther at Wingham Wildlife Park and he said it was similar to this. They also commented on the way its eyes shone yellow in the car headlamps."
Posted by Neil A at 14:40 No comments:

Report received 8th January 2013: "On Saturday 6 Jan at 18:00ish - We were travelling along Birchett Lane toward Hamstreet, about 600 yards short of the main road a large cat crossed the road in front of the car, it was light in colour, larger than a Fox, long fat tail curved up and very distinctive head and ears, it's paws were large and flat (if that makes sense?)."
Posted by Neil A at 10:32 No comments: