From Monday 15th - Thursday 18th November eight sightings of large, exotic cats have been received. The most impressive from Wye, near Ashford, of a black leopard stalking along a hedgereow at 5:00 am, another involving a black leopard seen by a security guard at Sittingbourne, and a daylight sighting of a black leopard at Gravesend. A photo was also received of two sheep that had to be put down after a severe facial attack. The wounds suggest they were killed by a dog. See photo. 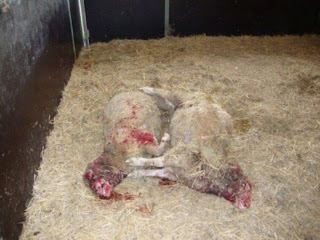 The latest batch of sightings include reports from Sittingbourne (possible Leopard Cat), Gravesend (black leopard), Dartford (black leopard).
Seen a 'big cat' in the south-east ? Report it at: neil.arnold@live.com
Posted by Neil A at 19:39 No comments:

In the last week there have been reports of black leopard from Upper Halling, Cuxton, Frittenden, and Birchington.
Posted by Neil A at 22:30 No comments: