http://www.dailymail.co.uk/news/article-1282333/Leopards-big-cats-ARE-loose-Britain--just-dont-tell-soul.html
Posted by Neil A at 18:33 No comments: 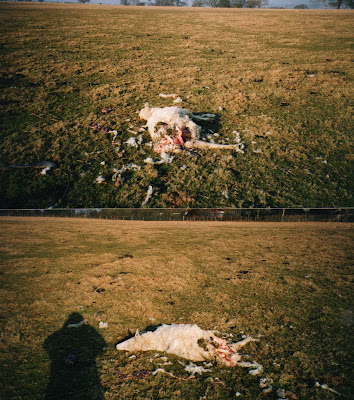 These photo's were taken in an undisclosed area of rural Ashford. The witness stated, "Pregnant ewe had mis-laid...hind leg could not be found...another sheep found dead in a tree".

The carcass, due to some mess, had clearly been scavenged afterwards by foxes with entrails and fleece strewn. But had a large cat killed the sheep originally ?
Posted by Neil A at 11:59 1 comment:

From a witness: "Small Dole is situated 2 miles south of Henfield and 1 mile north of the South Downs. I took my dog out for a walk 6am Sunday morning 9th May 2010 along Sands Lane towards Sands Farm. As I walked past the last house and looking east along Sands Lane I could see a large jet black animal sitting on its haunches on the left hand side of the tarmac lane. It was in the sitting position with its head level with the top of the barbed wire fence which runs along the field boundary. At first I thought it was a black labrador but couldn't see an owner. As I walked closer (within 200 yards of it) I could see it was definitely a large cat at which point I stopped. The cat seemed quite unafraid and not particularly bothered by my presence. My dog (cross between a terrier and a Jack Russell) was bothered and didn't want to continue along one of its favourite walks. As I waited it stood then bounded southwards into the scrub where I instantly lost sight of it. It held its tail slightly upwards at about 30 degrees from its body and the tail length was about as long (if not longer) than its body. The tail was bulbous at the end and parallel along its length.
I walked back home and haven't see it since."
Posted by Neil A at 11:50 No comments:

It's the most frequently asked question within the 'big cat' situation. It's a question which has plagued the subject for decades, and yet there never has been a mystery.
Find out why HERE
Posted by Neil A at 11:39 No comments: