A Mr Rowley writes:
'I, like you believe that big cats are present wild in Kent. However, my wife and I thought we saw one today at Hextable, which turned out not to be. At first we were convinced that it was a much larger animal than it turned out to be.

We had just pulled out of the Whiffens Farm business park when we saw in the field across the road a large cat with a long tail walking through the crops about 200m away. Its tail looked very long for a domestic cat and it looked quite tall. It also did not walk like a normal cat. I took some photos, (which I unfortunately deleted later. I bought it to the attention of a local across the road who although he didn’t see it said that it was a Bengal cat belonging to Whiffens Farm. I didn’t believe him as I have seen a few Bengals. Anyway, we realised that we could get a closer look if we drove up the road beside the field. Sure enough, there was the same cat walking along the road with a serious amount of attitude. It was indeed a Bengal but the biggest I have ever seen standing well over 30cm at the shoulder and a good 50cm long body and the tail was probably about the same. It was definitely a Bengal cat though.
The thing is , that when it was in the field with nothing else close by to compare it with, it seemed even larger than it was. Also the incredibly long tail looked distinctly leopard like. As Bengals ( which are a hybrid between a domestic cat and an Asian Spotted cat) are becoming more popular I am wondering how many sightings are of cats like this, or even this particular specimen. They don’t behave like your average cat in that they walk more upright, which together with the long tail just adds to the impression of size. It was also dark, with dark spots on a dark background in appearance with a more gingery hue around the head.'

This echoes a similar report from a J. Cotton:
'

I was sitting at the yard I keep my horses at , that is surrounded by trees and undergrowth with a small stream, when a large sandy colour cat came through the gate. It was about a foot and a half in length and about a foot or so off the ground. It had pointy shape ears and both light and dark sand colour fur with leopard style patchy spots with black around the outside and a darker brown inside. It did not seam bothered by us and the horses were not bothered as though they were used to it being there. It walked accross the field and along the side of the stream in the bushes then back across the field  and along the back of our tent and the rear of the stables . It then went into the bushes and undergrowth at the back of the field . My friends son followed it and it did not appear bothered but then disapeared into the undergrowth out of site. We have previously had strange things happen at the yard since we moved in about 5 months ago like the tent  we kept food in having a slash mark  down it when we arrived one morning that had not been there the night before, but we assumed that it had maybe been teenagers that had climbed the gate. We then had an episode where one of our horses had fur missing from its back with a large long cut line that looked like it had been cut with a thin sharp blade, rather like when a domestic cat scratches with its middle claw.  We are now a bit for our horses and when we have children in the field. Last weekend we had an episode also where two of the horses were displaying unusual behaviour snorting and pacing at one end of the field, and very erratic. They calmed down a bit when moved to our other field , but when we were walking the line of trees and bushes to see if we could find anything there was movement like something larger than the pheasents or a fox  but not as tall as a person in the trees and bushes .Do you think this is likely to have been the same cat causing these things. Unfortuenetly we did not have a camera and the mobile phone we had was flat so we were unable to get a picture. Our  yard is in an area surrounded by fields and woods in the Goudhurst Road area of Staplehurst, Kent.
Posted by Neil A at 16:09 No comments: 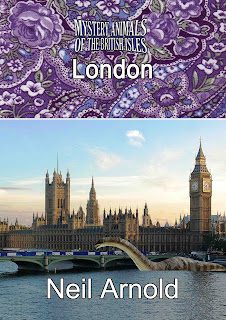 MYSTERY ANIMALS OF THE BRITISH ISLES: LONDON is a brand new book from Neil Arnold. Weighing in at over 300 pages, and published by CFZ Press, this unique volume looks at a bizarre menagerie of creatures said to have roamed England's capital city. With a whole chapter devoted to tales of the Surrey puma, the beast of Sydenham, the Winchmore Hill lioness, the Edgware tiger, and the Shooters Hill cheetah, MYSTERY ANIMALS OF...LONDON is a must have for any naturalist, historian, folklorist or anyone with an interest in the unusual. Forget Sherlock Holmes...Neil Arnold ventures into the concrete jungle and from its darkest corners investigates tales of vampires, giant rats, huge out of place birds, unusual River Thames inhabitants, insect swarms, rampant wolves, ghostly bears and animals which have escaped zoo parks and menageries. The book, available from Amazon, is the first of its kind to collate sightings, reports and evidence of unusual animals in the city. Perfect reading for a crisp autumnal evening.
Posted by Neil A at 17:18 No comments:

During the first week of October several witnesses observed a large, black cat with a long tail in fields at an undisclosed location in Tonbridge. On 12th October 2011 at 4:30 pm a bus driver named Mr Wyatt was driving his out of service vehicle from Brookland to Ashford on the A2070 when he saw a large (4 ft long) dark coloured cat crossing a field near the turn off for Hamstreet.

There have also been recent puma and lynx sightings at East Sussex.
Posted by Neil A at 17:49 No comments:

Where the wild things are! 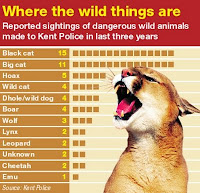 The Kentish Express ran an article in July 2011 highlighting the various calls Kent police receive regarding strange animals. The image, taken from the article, written by James Scott, does, unfortunately make a mockery out of some of the more genuine reports of 'out of place' animals with mention of 'big cats', 'leopards', 'black cat', 'wild cat' an 'emu' and even a 'cheetah', making the article a complete farce. Although some large animals such as dholes, have escaped from zoo parks in the past, the countryside is not a haven for wolves, a cheetah or an emu! One can see why sightings of 'big cats' aren't taken seriously.
Posted by Neil A at 19:36 No comments:

Juvenile black leopard seen at approximately 4:00 pm by two people metal detecting on land close to privately owned woodland. Animal stalked through undergrowth a few feet away. Animal described as having an extremely long tail.
Posted by Neil A at 19:23 2 comments: