Having just received this information by a female witness named Caroline, we'd like to hear more:

"I've just seen a cat strolling through the Holbeach Car Park in Catford. It had a black tip on a long thin tail, was a dusky brown colour and tall but slender and reminded me of a lynx.

i didn't have long to look at it before it disappeared behind some parked cars, but it wasn't a dog or a fox and it was much bigger than a domestic cat."

Catford, situated in the London borough of Lewisham certainly isn't known for its 'big cat' sightings and due to the vagueness of the report it's hard to really tell if this was a large predatory cat. Of course, sightings in London over the years have been sporadic mainly due to lack of green spaces although we mustn't forget that in 2001 a lynx was captured in Cricklewood after probably escaping from a  private collection although this was never verified. Whatever the case, the animal Caroline saw was not a lynx as she surmised as such cats do not have long tails, but hopefully if you're reading this Caroline you'll get back in touch to tell us more.
Posted by Neil A at 21:19 No comments: 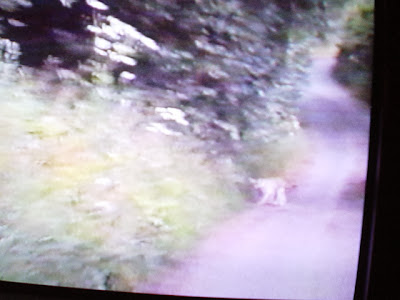 It's fair to say that a majority of so-called 'big cat' photographs are debatable to say the least, and considering the technology of today people still struggle to get anything decent on film and when they claim to do so they really do not like people having opinions on the footage/photo. This image has always intrigued us - it's a cat that was filmed around 2001 around rural Gravesend. It was broad daylight and two men, who were making a local history documentary were rather stunned, but alert enough to film this animal as it went across the road about thirty yards ahead. Many have looked at this image and believe it to be a lynx, or a Jungle Cat, or it could simply be an unusual variety of domestic, even so, what it proves as that these type of images are not good enough. It's interesting that when some people take a photo or film something, they immediately point the 'object' out and then those they've shown will latch onto that image without actually standing back and giving it a different view.

An animal in the distance, in the darkness - especially depending on the camera quality - can appear very strange sometimes. We've seen images that some are claiming are black leopards, but which are domestic cats. We've see others that some think are foxes and yet which are deer, and others that appear to show spotted leopards but are also foxes. The problem is, as already stated, when someone thinks they've got a superb bit of evidence they often fail to see beyond that, and so when their evidence is dismissed they take it to people (usually family/friends) who they know will pander to their 'evidence'. This is not a personal dig to anyone, but nature is a very funny thing and some things - certainly in different light - can appear very different in some aspects/angles/shades - to how they should originally appear. If one takes an alleged photo of a puma and then puts a photo of a real puma next to it ones eye can certainly become trained to thinking there is a comparison. In the photo presented here you can see two very large ears, and an upward curving shortish tail with a black tip. However, when we present an image of say, a Jungle Cat (see image) we can see a similarity - but that's because we are looking for one. 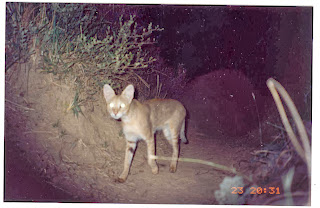 A poor quality camera can and does give the impression of spots, stripes, varying colouration, and people have every right to question an image that is not crystal clear. The actual Jungle Cat image here shows an animal that is 100% cat-like, but the photo taken in Kent is very much one that can be dismissed because there is too much of a blur, which in turn creates different shades. This in turn means that the alleged Kent specimen is not good enough as evidence and yet this is far clearer than more recent images we've seen which claim to show 'big cats.' The eye will automatically pick out certain features which aren't always there, again, we refer to the alleged 'big cat' caught on film in 1998 on Kent marshes (bottom image) where people claimed to see a muscular shoulder and a long tail, and yet both of these were tricks played by the undergrowth on what is more likely an Abyssinian cat.

Again, this image DOES show a cat-like animal and it's far clearer than some of the stuff doing the rounds, but as with any photo we require better evidence, the next time you put all of your faith in a trusty camera please make sure that when it snaps the next object of passing wildlife, that you eliminate everything else before concluding that it's a big cat "100%" because it's extremely likely that what you've filmed will be scrutinised and probably turn out to be something that you clearly can't see.
Top and bottom images copyright Neil Arnold.