Monday 26th September 2011 - 5:00 am, in vicinity of Beaconsfield Rd, Canterbury. Female witness walking home from work heading towards a dimly lit alleyway, saw a hulking shape at end of alley which she at first took to be a human. Witness walked to within ten metres and noticed it was a black animal which reflected green in its eyes. The cat was spooked by the witness and sprang into the darkness. The woman continued her route past the area the cat had been seen but there was no sign of the animal. Black leopard also seen at Blean Wood.

Thursday 29th September 2011 - 4:30 pm
Angler spotted labrador-sized black cat whilst fishing at Paddlesworth Lakes, near Snodland. Animal was sitting on its haunches on a woodland pathway. Angler noted the length of the tail. Witness went back to fetch his camera but when he returned the animal had slinked off into the woods.

Friday 30th September 2011 - 8:00 am
Woman walking her dog on country lane at Cooling, near Strood, spotted large black animal fifty metres away. Woman thought the animal was a labrador until it turned to face her. The animal was a large cat which had a swagger to its walk, and a long, thick tail. The animal sprang up a bank and disappeared towards fields.
Posted by Neil A at 18:47 No comments: 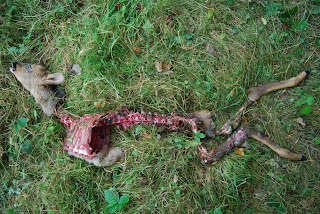 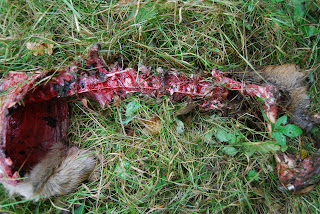 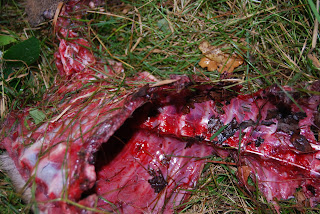 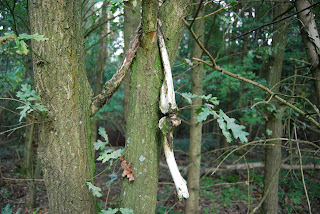 The following photo's were taken by James Mitson in 2011, who, whilst during a walk in forest area between Tonbridge and Tunbridge Wells, stumbled across the eaten carcass of a deer. The deer shows all the hallmarks of a 'big cat' kill - puncture mark to throat, bones chewed away, and the almost surgical precision of the way the fur and flesh is rasped away. Scat was also found a few miles from this area as well as part of a deer up a tree. All photo's used with permission of James Mitson.
Posted by Neil A at 16:33 2 comments: 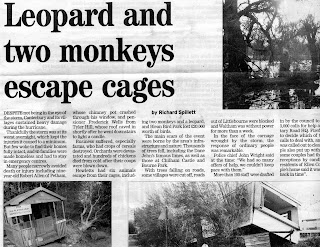 Although popular belief is that the population of 'big cats' in the UK today are the result of animals released after the introduction of the 1976 Dangerous Wild Animals Act, there have been other incidents which may well have enabled exotic cats to roam the UK. In 1987 a severe storm ripped through Kent - wallabies, monkeys, wild boar, and large cats most certainly escaped into the wilds - some of these (wallaby and boar) establishing themselves. Two conflicting reports from the time claimed that a large cat had escaped from Howeletts Zoo, situated near Canterbury.
From 13/10/87: 'Leopard on loose' - A snow leopard which escaped on Friday from Howletts Zoo, near Canterbury, after a tree crushed its cage, was still at large last night. "So far the animal hasn't been spotted," a Kent police spokesman said.
On 22/10/87 - 'Leopard spotted' - The clouded leopard (?!) which escaped from Mr John Aspinall's zoo near Canterbury, Kent, when a tree crushed its cage during last Fridays storms, was still on the loose last night. Officers said there had been two possible sightings, but attempts to lure it into traps failed.' 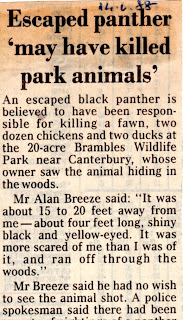 It's also worth noting that sightings of a black leopard also seemed to hit the headlines around the time of the storm and for a few years afterwards. See clipping

Although updates have only been occasional - too many sightings to list on the site - in the last month there have been some impressive reports. A lynx was observed in daylight by a motorist and his wife in the village of Sole Street, near Meopham. The animal crossed the road in front of the vehicle at a distance of 25-feet. A black leopard was seen at High Halstow in the vicinity of the RSPB area by a woman walking her Border Collie. The cat emerged from the undergrowth - the witness stated the cat was the same size as her dog. Also in September there was another daylight sighting, this time a black leopard report from Wormshill, a male witness walking his dog spooked a large, six-foot long cat which ran towards the meadow. An elderly woman had her domestic cat attacked by a large cat which left scratch marks on the hind quarters of the domestic cat and there have been further reports from Sevenoaks, Gravesend, and from Sussex.
Posted by Neil A at 12:17 No comments:

During the first week of September there have been varying clusters of reports from all over Kent. The most recent reports have come from Sheppey, Kennington, and Hythe - this involved scratch marks found high up a tree. Although a recent Daily Mirror article printed a photo of a domestic cat, which they called the 'beast of Burnham', after sightings elsewhere in the country, on Friday 2nd September a puma was observed at Kennington, Ashford. A male witness observed the four-and-a-half foot long animal from his bedroom at 11:30 pm whilst watching fireworks. Meanwhile, at Sheppey a male witness, whilst jogging observed a big black animal which ran down a track on the afternoon of 4th September. Other reports, currently under investigation have been received but will not be listed on here.
Posted by Neil A at 21:08 No comments: