"I live at Lydd on Sea right on the seafront and this has been playing on my mind for a while.  Early one morning (approx 5.30am), I let my dog out for a toilet and heard a really strange noise.  It was like a child roaring (strangest way I can describe it like a quick rah! like a small child would make but quite deep).  My dog barked and ran indoors.  We have the nature reserve running behind our house and right out across the Marsh. A while later I had taken my daughter to Primary school in Brenzett and had returned using the dungeness road, I noticed a police car parked opposite the Dungeness Power Station and a Police officer stood by his car, armed with a rifle. Now perhaps I am over re-acting but i put 2 and 2 together and thought that maybe I was not the only person to have this experience.  I had to take my dog to the vets that morning for a pre-arranged appointment and when I said to them about it, i was told there were reports of a large cat within our area, even a report of a sheep carcas found up a tree.  Also when walking my dog with my children in the summer (along the old railway track towards the 'concrete ears' behind Romney sands), we witnessed large scratches on a tree and broken branches (it was not a large tree, more like a small apple tree or similar).  A friend of ours has mentioned that their neighbour encountered a large cat when walking her dog up the train tracks one evening a couple of years ago."

There has also been received a batch of other reports recently, one being from Tonbridge regarding a large cat-like creature slinking through the undergrowth.
Posted by Neil A at 09:24 No comments:

A pair of leopards

There has been a recent sighting in rural Kent of two large black cats together. The animals, described as black leopards, could well be two cubs, two adults, or an adult with a cub and they were observed by a female motorist as they crossed a country road. This isn't the first time two black leopards have been spotted together in the area, and certainly not the first time there has been a suggestion of breeding populations in Kent with reports of several black leopards together emerging from areas such as Higham, Gravesend, Sevenoaks and Dover over the years.

A strange skeleton turned up recently in Worthing in Sussex leading witnesses to believe a dead 'big cat' had been found although it was more likely that the carcass belonged to a dog, but one that may well have been eaten by a large cat. Some argued that the skeleton belonged to a fox or even a foal. 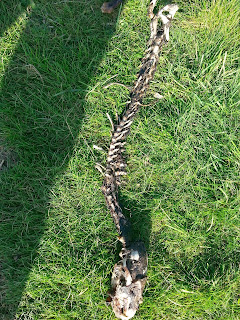 As usual there have been a number of reports received this past few days, one being from Folkestone, in broad daylight and concerning a young black leopard, witnessed by a woman who used to work at a zoo. The cat in question, described as "no bigger than a Collie but with an extremely long tail and moving fast and low to the ground like a leopard" was flushed out of undergrowth by her dog as she strolled along the Downs. This had been the second day-time sighting of a black leopard in the same area in two weeks. It's likely the cat had not long left its mother and may well have been foraging for food, such as rabbits, in the undergrowth. As the dog entered the foliage the cat speed away with the dog in hot pursuit.

Whilst speaking of Folkestone we came across an intriguing mention of a 'leopard' on the loose as mentioned in the Sheerness Times Guardian of 31st August 1962. We've often stated that despite some thirty years of research regarding so-called 'big cats' in the south-east that we've never received a report of a leopard of normal pelage - only melanistic. However, the report from the STG gives no mention of a 'black cat' or 'panther' and adds, 'Police at Folkestone searched in vain for a leopard. They received a message that a leopard had been seen lurking in a back garden at Shaftsbury Avenue (Folkestone). Inquiries were made at a touring circus in the area but no leopard was missing.' A search for the animal proved fruitless.

There has been a great deal of controversy created over the years regarding which species of cat actually inhabit the wilds of Britain. Lions, cheetahs, tigers, as well as jaguars are highly unlikely unless as escapees which are often recaptured or shot dead. Reports of normal leopards seem sporadic across Britain, with some researchers claiming that such cats would be more difficult to see which is highly unlikely when compared to the melanistic variety which at night would melt into the darkness. Black leopards may stick out more when crossing a field in broad daylight but in their countries of origin such animals are incredibly secretive, more so than those of normal pelage. We've never seen any hard evidence whatsoever to suggest that there are leopards of normal pelage roaming the south-east of Britain. Reports of so-called spotted leopard cubs can be often explained by reports of Leopard Cats, and whilst the very occasional report does come in of cats having unusual colouration, a lack of consistency means that such reports cannot be taken seriously until more people come forward to report such an animal.
Posted by Neil A at 23:56 No comments: