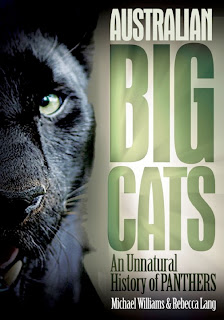 Only a handful of books have ever been written about what are known in the UK as ‘alien big cats’. This is a term I’ve always despised. Some of the books written have been informative little booklets, or like Marcus Matthew’s Big Cats Loose In Britain (CFZ Press 2007) they’ve existed as a superb guide to local legends and headlines through each county. Karl Shuker’s now hard to find Mystery Cats Of The World was also a pioneering book at the time but since then not enough books have emerged on the subject. So, step forward Rebecca Lang and Mike Williams, who have decided to write a book on the mystery cats of their native Australia. I’m sure many people didn’t even realise that Australia has a similar situation to the UK with its legends of large, feline predators, mind you, there are many countries across the world which have been plagued by cat flaps, but these stories are yet to form a manuscript.
Of all the books I’ve read on the ‘big cat’ mystery, Australian Big Cats is without doubt the finest. Even the most hardened of sceptics will enjoy this truly monstrous - and I mean monstrous at over 400 pages - read. Packed with fascinating eye-witness reports and data, Rebecca and Mike have also littered their work with some impressive photographs not just of huge paw-prints, slaughtered livestock and old newspaper reports, but fascinating photographs of the secretive animals themselves. After reading this detailed tome, which is nigh on exhaustive regarding the Australian situation, you’ll be more informed of the media sensationalism which gave birth to legends such as the ‘Beast of Buderim’, the ‘Broken Hill Lioness’, the ‘Canterbury cat’, the ‘Kaiapoi Tiger’, and of course the ‘Emmaville Panther’ which has become a media darling to rival our very own ‘beasts’ of Exmoor, Bodmin and the like in Britain.

However, these Australian dwellers are not the stuff of foggy folklore, and exist in some reasonably impressive photographs, and of course that ever elusive film footage which seems, rather hilariously, to drive most big cat ‘researchers’ mad in their quest for their own Holy Grail. Rebecca and Mike look at the facts, and debate whether Thylacoleo carnifex - a large marsupial cat - could still exist thousands of years after its alleged extinction. They examine reports of large cats escaping into the Australian bush, some as rumour, some as fact, backed up with photographs. The book eliminates the suspects, sifts through the mounting evidence, and also proves, startlingly, that the scrublands and forests of Australia are also inhabited by truly gigantic feral cats, one of which had its head blown off by a hunter. These monster moggies are a mystery in a field of their own, but are clearly no match for the eye-witness reports which suggest that black leopard and puma hide in the woodlands.
Written without bias, Australian Big Cats despite its size (and weight!) is an engrossing read (I read it straight through in two days), and it comes highly recommended. As a full-time researcher myself, I take my hat off to Rebecca and Mike for giving us a unique glimpse into what lurks in the shadows Down Under.
With so many eye-witness reports and evidence piling up, I’m pretty sure their sequel may not have to include the word ‘unnatural’ in its title, because surely it’s only a matter of time before such animals are taken seriously. And it’s books such as this which go a long way to aiding us in our quest for the truth. Get your paws on a copy now. Rating: 9/10
Available from Amazon.com
http://www.australianbigcats.com/
Neil Arnold October 2010
Posted by Neil A at 20:20 No comments:

Each month a post will appear updating readers of the number of 'big cat' sightings for that particular month.
September 2010 - 28 sightings - (16 black leopard, 7 puma, 5 lynx)
Most recent - September 28th - 1:30 pm - Knight's Park, Longfield Road, Tunbridge Wells.
Two witnesses walking on woodland path. 200 yards away enormous gingery-coloured cat (puma) sauntered across path, stopped and stared at witnesses for a few seconds then slinked into undergrowth.
Posted by Neil A at 12:18 2 comments: