Is a feral cat, or something larger attacking domestic cats in Bromley ?

Read all about it at the Newsshopper
Posted by Neil A at 16:23 No comments:

Fox killed by large cat and other sightings

The image was sent by a man walking his dogs at the Isle of Grain. The dogs disturbed a large animal which speed off when disturbed leaving behind this kill. The predator had attempted to cover its kill by scraping dirt/grass over it - the hallmark of a puma. In the last four days there have been eleven sightings from across the south-east with three reports coming from Sussex - the most recent near Haywards Heath on 24th September involving a motorist travelling to work at 5am when a huge black cat ran across the road. Photo by J. Deane 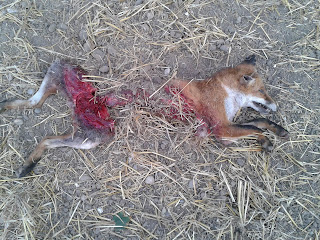 On Tuesday 18th September a black leopard was observed by a woman who was feeding her donkey at New Romney. The sighting took place at 4pm, and the animal observed was described as three-feet in length, slim in the body and slowly loping along a hedgerow. The marshy areas of New Romney have featured heavily over the years in regards to 'big cat' sightings with sightings coming from Lydd, Ivychurch, Burmarsh and toward Dymchurch. A few years ago one researcher claimed there were "thirteen black leopards" in Romney Marsh which must qualify as one of the most ridiculous statements of all time and the sort of comment that could quite easily create a witch hunt. The marshy area is perfect habitat for large cats (but not thirteen of one species!), particularly lynx, but as a territory for any cat it would be viable as from this area a cat could easily travel into East Sussex - there have been reports at Rye, Hastings etc - and east Kent where there have been many sightings over the years at Ashford, Folkestone, Dover and Tenterden.
Posted by Neil A at 17:16 No comments:

Over the past few weeks there have been more reports, mostly of black leopard in the Kent wilds and including the recent discovery of a deer carcass, photographed by James Mitson. The throat area of the animal sported several puncture marks. A black leopard has been reported from the Allington area of Maidstone by a female witness who observed the animal in her back garden. She reported the sighting to the police. There have also been a number of sightings from an undisclosed area of rural Gravesend where two black leopards have been sighted together. 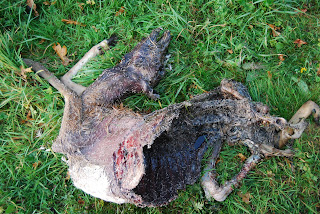 If anyone is interested, the CENTRE FOR FORTEAN ZOOLOGY are now running a wordwide 'mystery cat' blog which can be found at: www.mysterycats.blogspot.com and has been put in the capable hands of Emma Osborne. The site will look at sightings of unusual cats across Britain as well as the rest of the world and also provide updates on conservation and discoveries.
Posted by Neil A at 15:24 No comments:

Over the last couple of weeks there have been several reports made of black leopard, particularly from the wooded areas surrounding Gravesend. On Friday 28th August a black leopard was seen by a female witness walking not far from the Thong Lane area. There has also been another sighting on the Isle of Sheppey. The animal was observed by a father and son on holiday at Leysdown-on-Sea. With so many reports coming in only a few will appear on this sight as updates due to other committments.

If you have any evidence such as photographs of kills etc please do email them to neil.arnold@live.com
Posted by Neil A at 20:13 No comments:

The Croydon Advertiser recently ran an interview with Neil Arnold regarding the Essex 'lion' farce as well as recent Surrey cat sightings. Sadly the reporter in question made some terrible errors in misquoting, stating that there are 'pumas and cougars' roaming around!!!!!! Anyway, if you're interested, read it HERE
Posted by Neil A at 18:47 No comments: