A rather close encounter...

Although an older sighting this has just been received in reference to the post 'An older Maidstone sighting':

"I too had a similar experience in 2009, and emphatically agree with your sentiments. I certainly would not fancy having one in such close proximity again.

I am taking it as you are a female. You were very lucky!

My encounter with a Black Leopard occurred in a field at 01:30am, and was as incredible as it was terrifying. I had ventured with my two dog's along one side of the field which was completely overgrown, when I was confronted with two options, either turn and go back, or go through the field to my right. I decided on option 2, as the field had Pheasants in, and my dogs love chasing them. Please don't be alarmed, my dog's have never caught one of these birds, they're just not quick enough, but they enjoy doing it and it's very good exercise for all of us. On reaching the other side of the field, I turned right and made my way ahead between the four and a half feet tall grass along a rabbit run, when the two dogs shot past me and disappeared off in front of me. I glanced at the long grass either side of me and decided to check behind me, as I had reason to believe that a large cat may be visiting the location where I walk the dogs. I grabbed my small LED Torch and shone it along the rabbit run behind me. Approximately 20ft away, there was a pair of amber coloured eyes hugging the ground which then started to slowly move toward me covering a distance of about 4ft. As a realisation of which type of creature was facing me set in, a large cat, and it was stalking me, a wave of fear swept through me. I knew immediately not to turn and run and believed the only option was to stand my ground and try to back it off. I was carrying part of a tree branch to help negotiate muddy inclines and I raised both arms into the air whilst holding the stick, to make myself look as big and intimidating as possible. I then began shouting whilst making aggressive motions with the stick, but this was to no effect and the cat stealthily moved toward me another two times to within a distance of around 9ft. Panic gripped me for a few seconds as I realised my tactics weren't working. I stared down the beam of the torch into the cats eye's and just knew it was about to pounce. I very much doubt it was about to edge toward me another 4ft so I could stroke it. Out of desperation I kind of hissed at it as loud as I possibly could, and to my utter relief the eyes disappeared into the long grass to my left. I just stood there for 6 seconds or so, worrying that it may be trying to get behind me again, when it suddenly appeared around 40ft away in the direction from whence it had came. There was a bright full moon in a clear night sky and the sight of this animal raised in the air on its back leg's with the front ones pulled in to its body was magnificent! This was a big Leopard. It's said that a large male can grow to 6ft in length from the tip of its nose to the start of the tail, and when raised up on its back legs in a 2 o'clock position you can add the length of the back legs to get an idea of how large this animal appeared. The developed muscle I could see, a testament to its power and a vision that will always stay with me, as will the memory of the fear this creature instilled in me on a night in May in 2009."
Posted by Neil A at 19:34 No comments:

"I've only just stumbled across your web site and wanted to tell you about my brief encounter several years ago.  I was walking back from a friend's house late at night and as I walked past the open gates at St Luke's Church in Maidstone, I looked to check there was nobody lurking there, as I always do. Terrifyingly there was a big, black panther just over a metre away from me which had stopped and turned it's head to look at me.  It was probably roughly the size of a Labrador dog, but much wider and stockier.  To say I was terrified would be an understatement.  Can you imagine how it feels to be so close to a panther staring at you? I was so scared I just looked away, crossed over the road and carried on walking in the hope that it wouldn't come after me.   I've often wondered how exactly it came to be there - in the middle of a town?  Well, it's an experience I'd prefer not to repeat I can tell you."
Posted by Neil A at 16:09 No comments:

An exotic cat in a Surrey garden?

Read all about it HERE (with actual decent photographs for once!!)
Posted by Neil A at 10:31 No comments:

It's rather sad that when a piece of possible 'big cat' evidence comes to light that those involved are either a) immediately ridiculed or b) accused of putting on a hoax. Over the past few weeks the photographs of an object apparently swimming in Bewl Reservoir have caused so much controversy with various internet trolls, cowards etc coming forward to ridicule just about everyone involved. It's a sorry state of affairs that in the current climate that every image is dismissed out of hand but this is what it has come down to due to the You Tube generation. Even so, whilst no-one can say for 100% what the photograph shows photographer David Burr has sent me two more images which hopefully may add extra spice to the mystery. 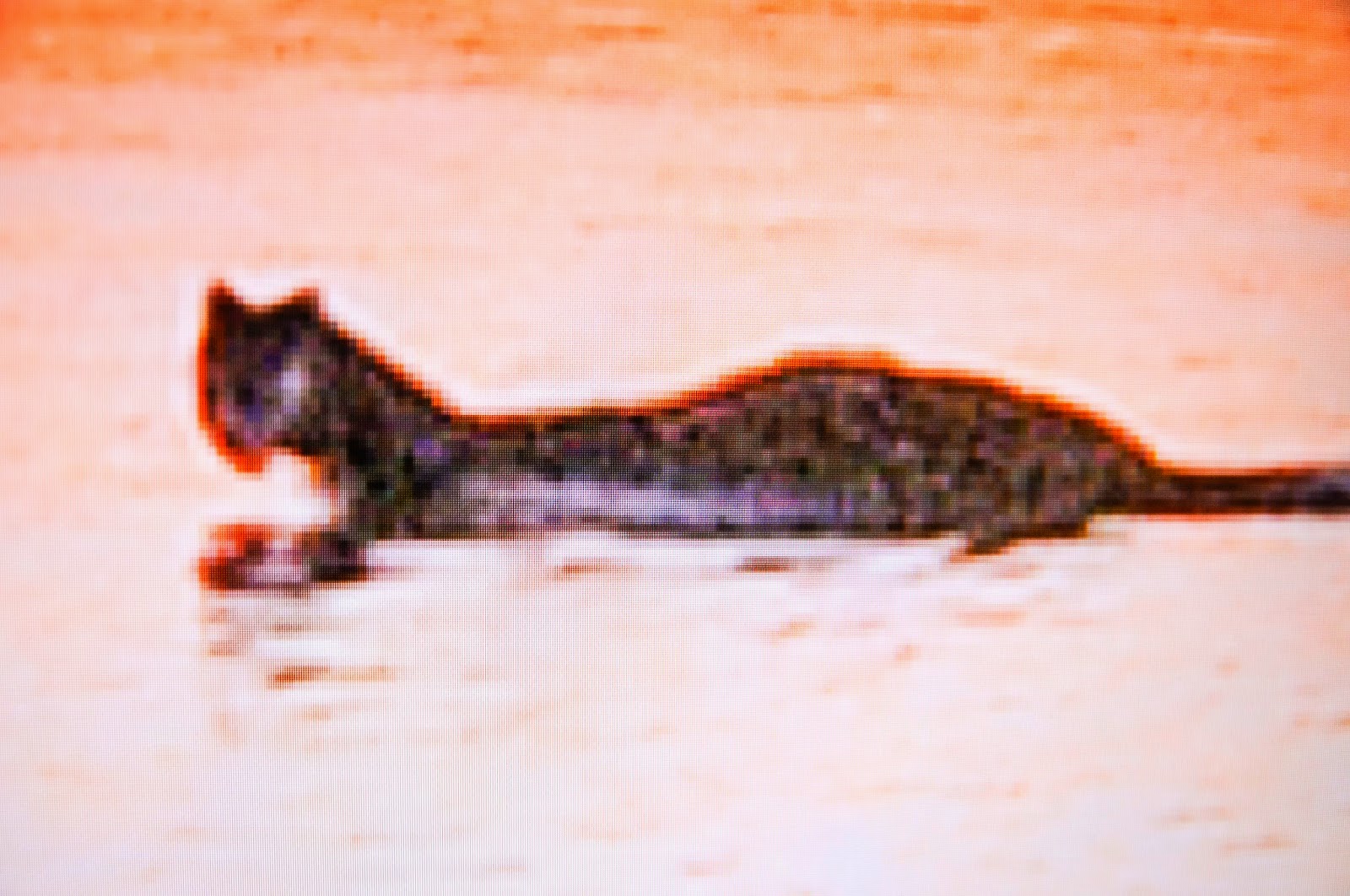 The main image shows an enhanced picture of the object. Now, many people have put forward opinions that the original silhouette shows a bird, such as a coot, swan or grebe, and we present here images of such birds which clearly DO NOT match. The image does NOT show an otter, deer, dog, mink, or fish either. As with all alleged evidence for anything unusual we naturally require more to go on and what sceptics need to realise is that people will go on researching, collecting evidence and data etc because if anything it's fun, so it is rather sad that so many people can become so nasty when such evidence is put forward. You'd think that some detractors would have something better to do with their lives rather than cowardly hide behind a PC screen rather than offer constructive debate. But even so, the other image shows just how shallow the reservoir in question can be and it would suggest that if this photograph does show a cat then it is literally in a few inches of water.

Some people - whether adults or children - have a genuine interest in so-called 'big cat' sightings in the UK, and it's a topic that brings much debate, it's just a shame that some of it is so unhealthy. But anyway, hopefully the silhouette images of swan, coot and grebe will prove that the photograph taken by Mr Burr is NOT a bird. All CONSTRUCTIVE thoughts are welcome. 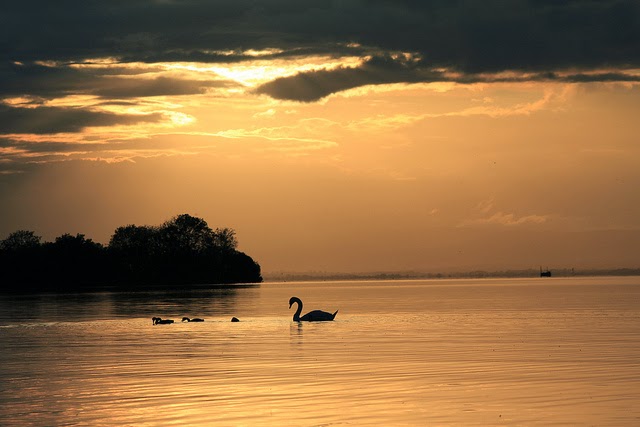 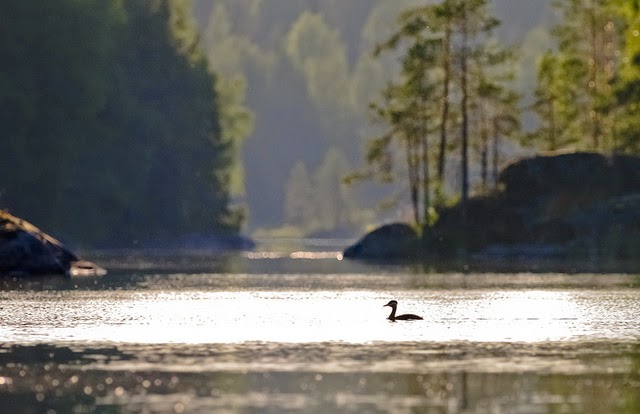 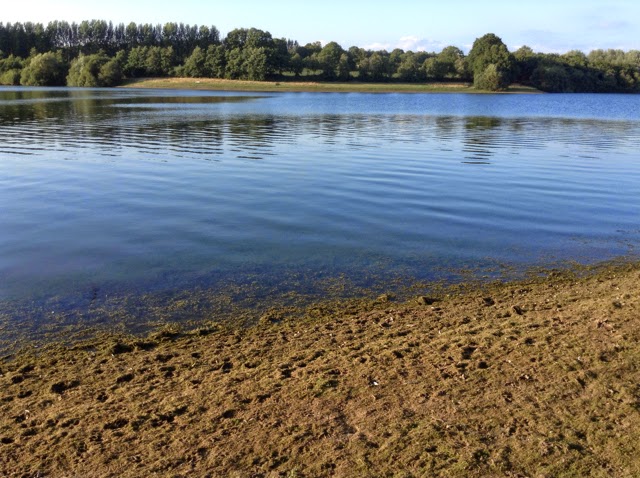 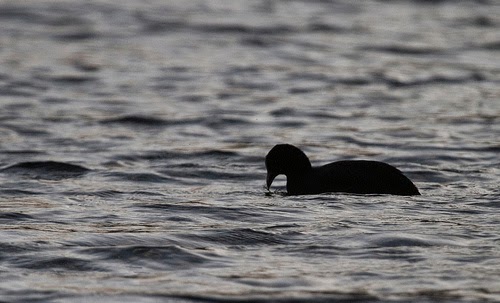